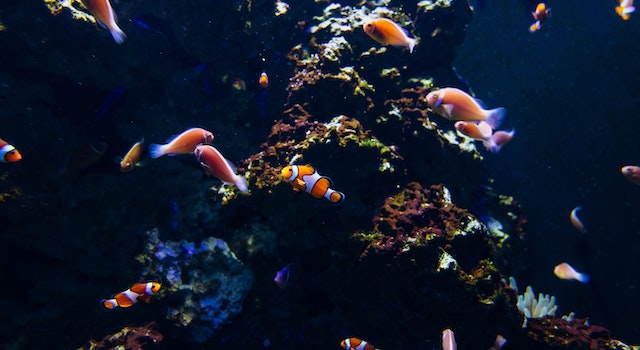 8 Best Fish For a 6 Gallon Tank

Choosing the best fish for a 6-gallon tank can be a daunting task. There are so many varieties, each with its own unique characteristics. Luckily, there are several common species that can be used as a starting point to find the fish that is right for your aquarium.

Despite its diminutive size, the Chili Rasbora is a striking addition to any aquarium. Its coloration makes for a beautiful display, and its peaceful temperament makes it a good addition to the tank.

This species is native to tropical peat bogs in Borneo. In their natural environment, Chili Rasboras are likely micro predators, feeding on tiny plankton and algae. In the aquarium, they are best kept with other peaceful, low-swimming invertebrates.

The Chili Rasbora is a schooling fish, meaning it swims in a group. It’s best to keep a school of at least 10 Chili Rasboras, and you should have a minimum of 10 gallons of aquarium space. You will also need an area for swimming and a swimming cover, like driftwood.

These fish can be difficult to care for. They are sensitive to changes in water conditions, and they are susceptible to fungal and bacterial infections. If your tank is not properly maintained, your Chili Rasboras may become sick. In addition to this, they can be territorial. During the breeding season, the males can become aggressive.

Keeping Fancy Guppies in your aquarium is a great way to add color to your tank. These guppies are also a popular choice among beginning fish keepers. They are peaceful and easy to care for.

These tropical fish are well-adapted to a variety of tank conditions. They are also easy to breed. They can live for up to three years in captivity.

Fancy Guppies are commonly available at pet stores and online. Their color patterns range from solid colors to mixed colors. Some varieties have rosettes. These fish can be divided into three groups, the round, the tuxedo, and the fan tail.

Guppies are peaceful tropical community fish. They prefer to swim in a school. They can be kept with other livebearers, but they should not be housed with aggressive species. They prefer a moderate current in their tank.

They can be kept in aquariums with a minimum of six inches of water depth. They prefer temperatures between 73 to 82 degrees. The water should be free of chlorine and ammonia. The pH of the water should be between 7 and 8. They also need a filtration system to maintain the water quality.

Choosing Betta splendens as one of your tank fish is not a bad idea. They are easy to keep. But they do have a tendency to become aggressive. That’s why you need to make sure your tank is a good match for them.

Betta splendens is a very aggressive species. They fight with each other until they die. If you are not careful, they can become a danger to your other fish. Also, they don’t like to be around other fish with fins.

Betta splendens is mainly found in Southeast Asia. Its range extends from the Isthmus of Kra to the eastern slope of the Cardamom mountains. In the wild, it eats algae, zooplankton, and insect larvae. In captivity, it is a popular fish.

Betta splendens is one of the most popular fish for Gambling. The name comes from the Malay word “beta,” which means fighting. They are also known as Siamese Fighting Fish.

Betta splendens are a good choice for community tanks. They are not as aggressive as other species of bettas. They can live in an aquarium with docile fish and non-fish species. However, they do not like fast-flowing water. So, you’ll need to change the water frequently.

Among the many shoaling fish in the aquarium, Harlequin Rasboras Trigonostigma heteromorpha is one of the most popular. They are also among the most peaceful and easy-to-care-for species. However, these fish can be prone to diseases in an unclean environment.

The Harlequin Rasbora is known for its black or dark purple side markings. It can grow to a length of two inches. It is an omnivorous fish that feeds on a variety of small insects and crustaceans in the wild. They are primarily found in peat swamps and forest streams. It is also common to find these fish in rivers.

The Harlequin Rasbora can live up to three to four years in captivity. However, it is not a good parental caretaker for the young. It is known to eat fish flakes, pellets, and live meaty foods.

Harlequin Rasboras can also breed in hard, alkaline, and acidic water. However, they are mainly schooling fish. They do best in spacious aquariums. They are mainly found in the Southeast Asia region.

They are native to swamp forests and peat swamps. They prefer open spaces and slow-moving water. These environments contain increased concentrations of humic acid. They also contain minute amounts of minerals.

Whether you want to add a little color to your tank or are just starting out in the hobby, the neon tetra is a popular fish. Although they aren’t very large, these fish are a great addition to any aquarium. They are easy to care for, are non-aggressive, and are fun to watch.

The neon tetra can live up to 10 years in a well-maintained tank. However, they are not recommended for newly cycled tanks. They are sensitive to water conditions and will need frequent changes.

Neon tetras are omnivorous, eating algae, plants, and small invertebrates. They do best with live foods, but they will also accept frozen foods. They can live in a variety of water conditions but prefer water with a slightly acidic pH and soft water.

Neon tetras prefer a live-planted tank. They are also easy to culture. They will eat crushed flakes, pellets, and freeze-dried foods. They also do well in tanks with other tropical fish that are larger than them. They will school together, making them a nice addition to any community tank.

Known as the “Galaxy Rasbora,” the Celestial Pearl Danio is a colorful freshwater species that can be a great addition to any nano aquarium. This fish has a beautiful appearance and is known for its peaceful temperament. This species is also easy to breed and care for. The Celestial Pearl Danio can live for up to three years in the wild. This makes them a good choice for beginners.

The Celestial Pearl Danio is primarily a freshwater species that lives in small streams and ponds. They are omnivores and are known to feed on algae and plankton. In addition to food, they also like to spawn. These fish have the capacity to lay between 20 and 30 eggs at a time.

The Celestial Pearl Danio can be quite a small fish. They are around 2.5 cm long. They are also relatively slow-moving fish, making them a good choice for beginners.

This fish gets along with most other species. They are also a good tank mate for zebra danios and chili rasboras.

Whether you want to add some color to your community tank or you simply want a unique animal to display in your aquarium, a Zebra Danio is a great choice. These fish are known for their color and fun personality. While you can keep these fish in a community tank, they can also be kept separately.

Zebra Danios are active swimmers. Their life span is between two and five years. Zebra Danios are highly resilient fish that can survive in a variety of aquatic environments. These fish are also very easy to breed.

They are highly social animals that form tight groups. They are highly adapted to a wide range of water parameters, making them ideal for aquariums. You will need to maintain stable water temperatures, levels of light, and pH. You will also need to use a filtration system to maintain water quality.

In the wild, the Zebra Danio lives in shallow streams and rivers. They prefer to live in shoals. They also like a variety of plants, including the Amazon Sword Plant, floating plants, and driftwood.

Whether you are looking for a community fish or simply an indicator, Cardinal Tetras are a good choice for your 6-gallon tank. The coloration and the overall appearance of the fish are stunning. It is also a very peaceful fish, making it a good addition to the tank.

This species is a native of the Orinoco and Negro rivers in South America. These rivers are located from Brazil to Columbia.

Cardinal Tetras can be kept in saltwater and freshwater aquariums. The water must be very clean and should not contain any calcium salts. The water should also have a pH of 4.6 to 6.2. It is also important to keep the water at a temperature between 73deg and 81deg.

How many fish can I keep in a 6 gallon tank?

each gallon of water, one inch of fish. In this case, the fish would be six “inches” long. The catch here is that one six-inch fish cannot and should not be kept in a six-gallon aquarium. In that aquarium, you would house 6–10 small community fish instead.

As long as each fish is no bigger than an inch, you can keep roughly 2-4 fish in a tank this size. The majority of smaller fish breeds, including Tetras, Betta, Rasbora, Shrimps, and others, would fall within the one-inch fish per gallon guideline. It’s not advisable to keep larger-than-1-inch fish in a 5-gallon tank.

What fish do well in 5 gallons?

I’ve referred to killifish, Betta fish, and gouramis as “Southeast Asian Puddle Fish” throughout my life. They are perfectly suited to residing in a 5 gallon tank due to the size of their natural habitats. Males are more colourful than females, and they frequently flash their colours in a territorial show.

Can 2 goldfish live in a 6 gallon tank?

Choosing a tank of at least 10 gallons for one goldfish and 20 gallons for two goldfish is a decent general rule of thumb. You’ll need a much bigger tank if you want to keep moor or fantail goldfish.

What can you keep in a 6 gallon tank?

A 6 gallon tank is regarded as a nano tank and may house a variety of species. If you like, you can keep only one betta, but tetras, such as neon or cardinal tetras, are a little more interesting options. They will be alright if you keep 5 or 6 of them in that aquarium.